Posted on 16 Hyd 2018 | Posted in Pest Control Database, Crawling insects |
Autumn each year, if it is too wet, disrupts the lives of millipedes. Then they leave their habitats and hiding places, and in search of dry places they move towards human settlements, to the surroundings of various buildings and their rooms, where around the foundations they create a layer of worms, several centimeters thick, winding "worms". 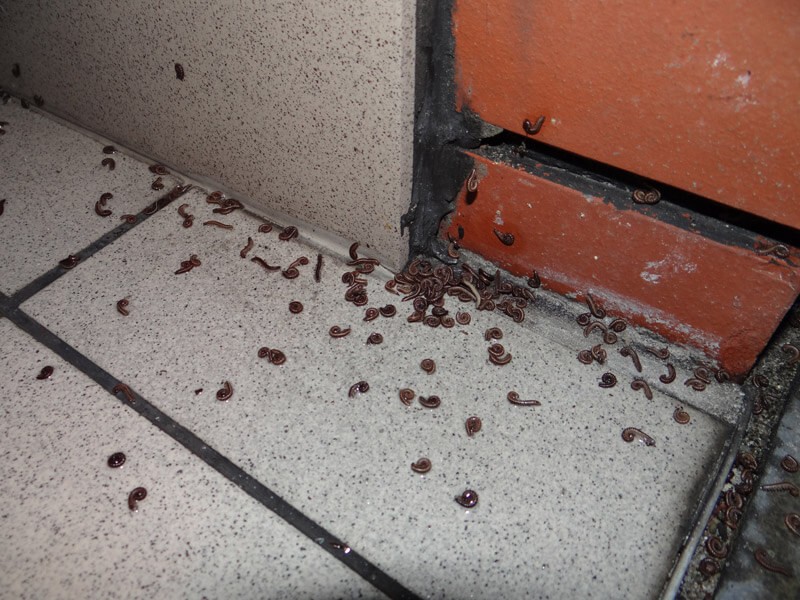 Millipedes (Julida) constitute the Diplopoda government in the arthropod type. They are medium sized animals, from 2 to 47 mm long, with a strongly elongated and cylindrical body. The body of millipedes covers the hard outer armor, containing a lot of calcium salts (therefore they unpleasantly crunch when they are accidentally trampled off).

They have a head, a three-segment torso and a long abdomen. There are simple eyes on the head, a pair of short tentacles and a biting mouth organ. The first ring of the torso (neck) has no legs, the next two have one pair of legs. From the fourth ring, the abdomen begins, consisting of double rings merged with each other; so each such segment has two pairs of legs. Millipedes therefore belong to the two-masters (the Diplopoda class). The number of abdominal segments may vary from species to species (even over 100 in some millipedes). In males, one pair or several pairs of legs can be turned into a copulation apparatus. On the sides of the rings there are lenticels, through which the air enters the tracheas, which the millipedes breathe.

Millipedes are moving slowly forward, evenly, with fluid motion. Moving legs form motion waves that move from the back of the body to the front. At rest or worried, they curl up into a ball and fall into a still numbness. Some millipedes emit a defensive fluid with an unpleasant smell. Some species defend themselves with produced Prussian acid.

Millipedes are demersal animals. The females, after fertilization, build bell-shaped nests in the ground, where they place several hundred eggs. Millipedes lay eggs from May to September. After a few weeks, the larvae hatch from the eggs. The juveniles are similar to adults. They feed and grow, licking several times. After each moulting their body grows and lengthens as new segments and legs appear.

In winter, adults and larvae of millipedes in hollows, crevices or dugout pits in the ground. The full development of the larvae lasts a year. Millipedes live from 3 to 5 years.

Millipedes usually inhabit wet places and during the day they stay in hiding places, under fallen leaves, stones, boards, beams, under crates and pots. Living in the top layer of soil, they feed on rotting plant debris and germinating seeds. Occur in crops, they damage emerging young plants. Sometimes they chew the roots or bite, like wireworms, narrow sidewalks in tubers and onions of weakened and sick plants. In the rich in humus and moist soils, the seeds of many plants during germination can be completely eroded by millipedes. Damaged sprouts, delicate roots and stems along the ground of young seedlings wither, break, fall over and wither. In the greenhouses are gnawing the clove seedlings and young shoots of ferns. In hyacinth and tulip bulbs, in begonia tubers, cyclamen and orchids, they gnaw deep cavities.

On the field of cultivation and the field of millipedes, they attract the sugar produced during germination and products of the disintegrating tissue of germinating seeds. Later, they go on developing young plants. Their harmfulness increases in the period of cold weather, which delays and prolongs the germination period of seeds. Feeding on rotting debris of plants play a useful role, as they accelerate the processes of organic metabolism in the soil.

Some millipedes are predatory, but most of them are herbivorous. The most common ones include the millipedes, the black millipede and the brown millipede.

Powered by Magento 2 Extensions by Mageplaza

You have no items to compare.